The Power of Music

by Calvin Tan / Wednesday, 30 May 2018 / Published in Senior/Age Fearless, Wellness 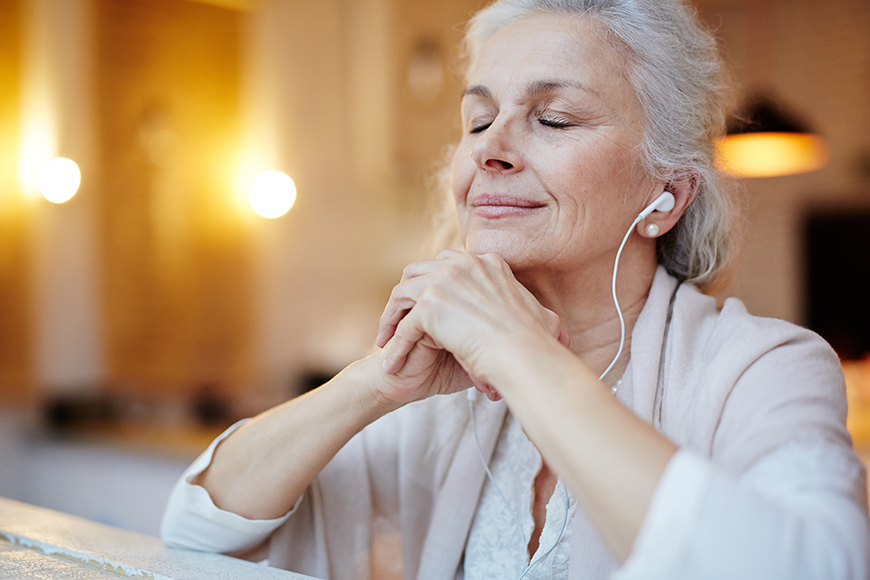 Ready to be happier, healthier, and wiser? Crank up your favorite song and tune in to the health benefits of music.

If your answers are A, B, C, and more, you’re in sync with emerging science that continues to uncover powerful ways that listening to music (and singing in the shower!) can improve your well-being. “Music is good for the body in so many ways,” says Lisa Kynvi, MA, MT-BC, LMHC, a music therapist with Care Dimensions in Danvers, Massachusetts. “Just think about how you respond to a favorite song after you’ve had a difficult day, or how certain songs motivate you to get up and dance or go and workout. What you’re experiencing is more than an emotional response; the music is triggering key areas in your brain that set off a chain of events that do have real health impacts.”

Here Are a Few Key Ways Music Can Boost Your Health:

Through her work, Kynvi has seen firsthand how listening to music can help people better manage physical pain and stress. “When the music starts,” she says, “the body relaxes, breathing and heart rate slow down, and this sense of calm takes over. It’s a non-pharmaceutical way to promote healing.”

Researchers aren’t exactly sure what happens within the body, but believe music signals the brain to release dopamine, a neurotransmitter that plays a role in controlling the brain’s reward center. Different studies looking at the effects of listening to music as a means of reducing pain have found strong connections. In one study of people living with fibromyalgia, for example, the group assigned to listen to tunes that were slower than 120 beats per minute every day for four weeks reported experiencing less pain than the group assigned pink noise (which is akin to ocean waves). Similarly, another study found that when patients listened to music of their choosing beginning the night before scheduled surgery and for the next two days, they reported “significantly less pain” than a control group.

Music can help you beat loneliness

Barbara Carlsen has been directing the Kountze Memorial Lutheran Church choir in Omaha for more than 16 years, and in that time, she’s found that group singing has helped members form strong bonds. “In each choir,” she says, “I’ve had people in their 20s through their 80s; I even had one gal who sang with us until she was 97 — she lived to be 102. Socially, music is a great way for the older folks to connect with each other and with younger people.”

Carlsen’s choir is on to something: 43 percent of people over age 60 report feelings of loneliness, according to a University of San Francisco study. Chronic loneliness has been linked to many health problems, including an increased risk of developing dementia, depression, and high blood pressure.

In work settings, some people can maintain focus with music going in the background, while others function better in silence. But when researchers wanted to see if music had any impact on memory powers, they uncovered some hopeful signs pointing to “Yes.” Want to learn a new language? One recent study found that singing phrases in the unfamiliar language can help people remember the new words. Another study that asked participants recovering from a stroke to either listen to music of their choosing every day, put on an audiobook, or follow only their medical treatment plan found that six months down the road, the music group showed greater gains in verbal memory and the ability to focus, compared to the other groups.

Music is also being incorporated into dementia care. Performing and listening to music has helped individuals living with dementia (or showing signs of the disease) improve their mood and their memory recall. This is a benefit Carlsen has seen with her own mother, a former musician who has Alzheimer’s disease and is living in a memory care unit. “She can’t remember where she is or who’s been to visit, but she continues to sing in my church choir because she can still read music better than most,” says Carlsen. “Even though she doesn’t remember singing afterwards, she is a part of the choir singing in the moment. It’s the only thing that she can do on her own that is from her life.”

Music can help you sleep better

Several studies connect music and improved sleep quality. Just as putting on the right tunes can help pump you up before a workout, listening to music that you’re familiar with and that relaxes you before you turn in for the night can help you fall asleep faster and sleep more soundly. (Unfamiliar songs might keep you in wake mode, as your brain tries to process the new stimuli.) Scientists believe music with relaxing melodies and slower rhythms prompts the release of oxytocin and other compounds with sedative qualities. The sweet spot for unwinding to music seems to be 45 minutes before bedtime.

“Music is a proven form of self-care that’s often overlooked,” says Kynvi. “When a song comes on, the atmosphere in a room changes and the body responds to that. I encourage everyone to build a personal relationship to music — dance to it, sing or play along, or just listen and enjoy. It’s your relationship, invest in it and it can work wonders for your well-being.”